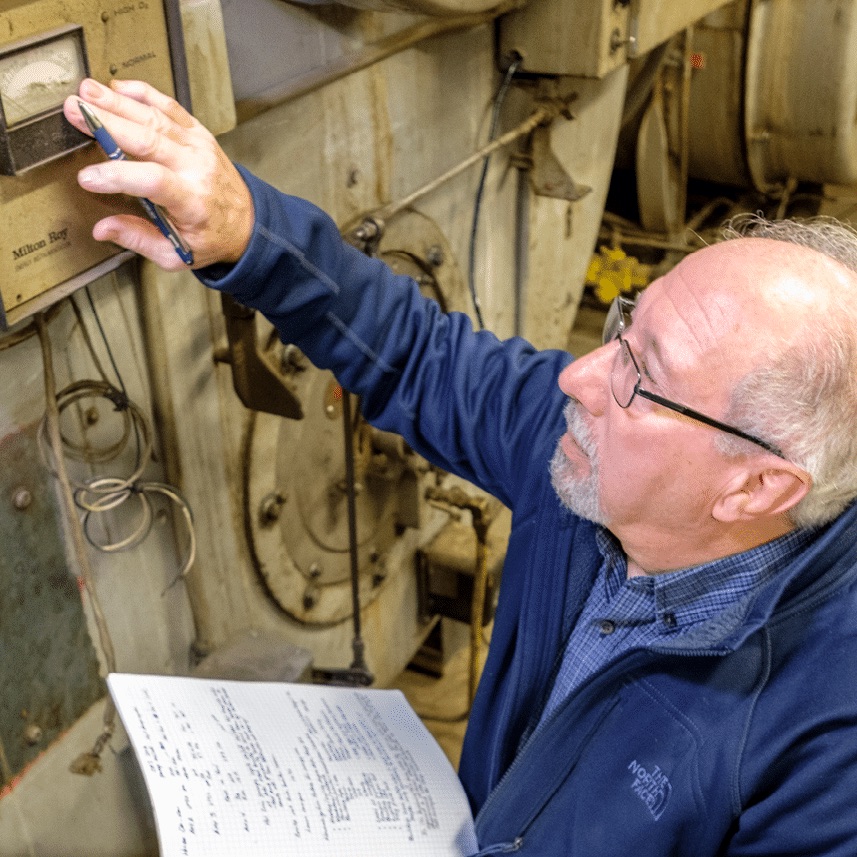 Last October, Larry Banta ’73 (pictured above) drove to Kalamazoo from his home in West Virginia to attend his 45th homecoming class reunion. During the visit, President Gonzalez spoke to Larry’s class about the state of the College, his vision for its future and the need for some significant investment in the infrastructure of the institution. “Pipes are breaking, we are having floods in the buildings,” he said, and he made a (partly joking) pitch for someone to donate a new chiller for the campus air conditioning system. His words struck a chord with Larry—a recently retired professor of mechanical engineering. “I couldn’t afford to donate a chiller,” he said, “but I do know a good bit about energy systems and controls. I could donate time and expertise, if that would be helpful.”

He shared this idea with classmate (and recent K retiree) Liz (Sloan) Smith ’73, who provided him the contact information for Susan Lindemann, the College’s director of facilities management and chief sustainability officer. Larry wrote to Susan offering his services pro bono as an energy systems consultant. Susan accepted the offer, and in the three months since homecoming Larry has made two trips to campus to meet and consult with Susan, her facilities management colleagues, and the engineering firm HDR. “Susan has inherited a challenge,” Larry said, “but she and her team are very capable and are making progress. Still, it will take several years and a lot of money to make it all whole again. I hope to help with some of the planning and to provide advice concerning both conservation and the integration of solar and other energy technologies into the overall energy plan.”

The development of an energy infrastructure master plan and the upgrade of campus spaces are key elements of the College’s strategic vision.

Energy conservation and energy systems have been a lifelong passion for Larry. After graduating from K with a degree in physics, he and his wife (Connie Bostwick ’75) moved to Atlanta. “I wanted to become a solar energy engineer,” he recalls, “but my timing was a bit off.” By the time he completed his M.S. degree in mechanical engineering at Georgia Tech, the “energy crisis” of the early 70s was over, and solar energy research was taking a back seat to manufacturing and robotics. Still, Larry was able to amass a great deal of experience in industrial energy conservation and management. He worked for several years for Georgia Tech in an Industrial Energy Extension Service, providing technical and economic analyses to a wide variety of Georgia industries about energy conservation. He also taught workshops to plant engineers, engineering professors and industrial managers in several Caribbean countries, eastern Europe and Africa on how to perform detailed energy audits and how to calculate economic return on energy conservation investments. Along the way he became interested in automatic controls. He eventually returned to the classroom and completed a Ph.D. in mechanical engineering, specializing in control systems and robotics.

“The Ph.D. was the union card,” he said. “Since literally our first date, Connie and I had talked about someday having a homestead with a solar house and a place for her to have a horse.” That wasn’t going to happen in suburban Atlanta, so Larry decided that one way to live a rural life as a scientist was to teach engineering at a university. In 1986, they moved to Morgantown, West Virginia, and bought a 50-acre farm. Larry got his solar house, Connie got her horse, and Larry taught in the mechanical and aerospace engineering department at West Virginia University for 29 years, retiring in 2015. Larry’s research was largely centered on industrial energy conservation and controls. He worked extensively with the National Energy Technology Lab on hybrid electric generation systems, combining solid oxide fuel cells with gas turbines to generate electricity with a thermal efficiency above 70 percent. In 2013 he spent six months in Italy on a Fulbright fellowship to work on advanced controls for a lab called the “Energy Hub” at the University of Genova. Larry helped develop control strategies to optimize an integrated system of solar panels, an internal combustion engine/generator, a gas turbine generator and a simulated fuel cell. The system was integrated into a campus microgrid and supplied electricity and hot water for space heating to several campus buildings.

Asked why he feels motivated to give his time and resources to the College, Larry says, “K was an incredibly important influence on both me and Connie in many ways, and we want it to thrive and prosper. In addition to finding each other at K, Connie and I developed deep and lasting relationships with our classmates that have been important to us over the years. K taught me a lot about both self-confidence and humility. I learned to write persuasive prose there, and that was critical to my career as a professor. The foreign study experience was transformational. Everyone knows as an intellectual concept that humans share common fears and hopes and dreams. But living abroad, I got it, deeply, here,” he says, touching his heart. “That wouldn’t have happened had I gone to Purdue.

“We give K money, and will continue to do so,” he says. “But I hope by volunteering in this way, I can help K in a more impactful way than I am able to do with a check. I can help K to significantly reduce its carbon footprint and to save tens of thousands of dollars each year on its energy bills. I can help the College plan for and integrate solar energy, fuel cells and emerging energy technologies into its energy infrastructure. I can help K to be a leader and an example to its students and community. I want to give back to K a bit of what it gave to me: transformation.”

Connie (Bostwick) Banta ’75 earned a major in English and a minor in French. She studied abroad in Clermont-Ferrand, France. After the couple moved to Atlanta, she taught English and French in a private junior high, then entered graduate school and earned an M.A. in teaching at Georgia State University. She then taught French in public high schools. After moving to West Virginia, she taught English and did technical and PR writing at West Virginia University, where she earned two more master’s degrees—a Master of Fine Arts in Poetry and a Master’s in Counseling. She retired in December 2018 from her favorite job as a clinical therapist.

Larry and Connie have a daughter and a foster daughter living in Florida and Ireland, respectively, so there is travel (with destinations other than Kalamazoo) in their future.