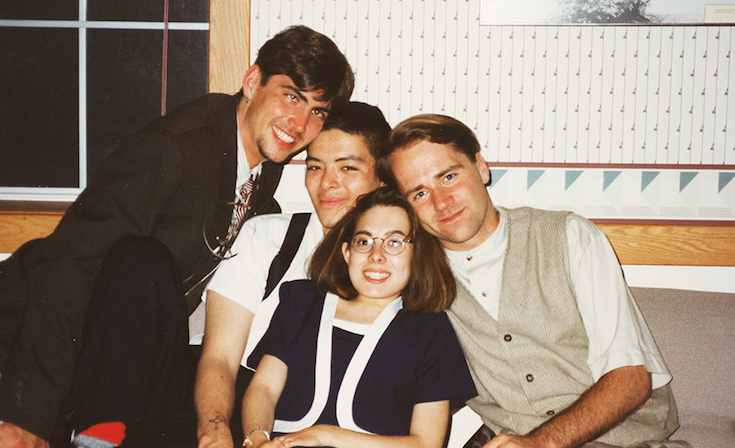 Not many people know their career path by age 4. Amy Houtrow ’96 knew—she would be a doctor. She would help children like herself. She would make a difference in the lives of children with disabilities.

Born with a rare genetic bone disorder that affects only about 50 people in the world, Houtrow has lived a life immersed in medicine, first as a patient, undergoing numerous surgeries, now as someone who provides health care, trains the next generation of clinicians, and conducts research focused on improving outcomes for children with disabilities.

“I developed a great respect for the health care field as a child,” Houtrow says. “With all the specialized treatments and surgeries during my childhood, I was exposed to medicine in all its wonders. I knew pediatrics would be my life.”

Part of Houtrow’s spine was fused when she was 4 years old, but that did not keep her from attending school. She was carried on a board to pre-school, where other children came to call her “the laying-down girl.”

There was no keeping Houtrow down, however.

“I grew up in Kalamazoo and went to Loy Norrix High School,” Houtrow says. “I was awarded the Heyl Scholarship, so there was no question that I was going to K.”

Houtrow was also part of a legacy family with ongoing Kalamazoo College connections. Her late grandfather, Sherill Cleland, was a professor of economics at Kalamazoo College from 1956 to 1973 (later president of Marietta College in Ohio); her mother, Ann (Cleland) Feldmeier, was in the class of 1972; and her uncle, Scott Cleland, was in the class of 1982.

“I loved science…the ‘basic sciences,’ not so much,” Houtrow smiles. “Luckily I had great professors and friends to help me succeed.”

At K, Houtrow pursued numerous passions. She had acted in the Kalamazoo Civic Theatre since the age of 9, and she continued her involvement in the theatre by taking theatre classes at K and performing in shows. Houtrow earned the Sherwood Prize for Excellence in Public Speaking in 1995. She also helped create the improv theatre group called Monkapult that performed in the basement of the Hicks Center and other venues. “Being in theatre helped me learn to be a collaborative member of a team, to think on my feet, and hone my public speaking skills,” Houtrow says.

She fueled her passion for social justice and inclusion by joining the GLBSQ (now Kaleidoscope) meetings to support her friends in raising awareness of LGBTQ+ issues. She helped organize the Glamour Party in 1995, which was the precursor of the Crystal Ball (now Pride Ball), an event that students attend dressed in drag with the purpose of challenging gender norms. She also hosted a radio show on WJMD with 1960s era protest and folk music.

“It isn’t just rigorous academics that made the K experience so valuable,” Houtrow says. “My liberal arts education set the stage for my medical career, and it also taught me how to incorporate social justice into my work, to critically think, and to be creative.”

As a resident physician, Houtrow found herself frustrated at the many times she had to spend time on the phone, arguing with insurance companies to get the health care her young patients desperately needed. While her motives were to obtain the best care for her patients, she felt that the motivation for insurance companies was to turn a profit. She is a proponent of universal health care funded by the government. “Everyone is deserving of high-quality health care, not just those who can afford it,” Houtrow says. Her desire to improve access to needed health services for children with disabilities led her to pursue a degree in health policy and subsequently medical sociology. “I was incredibly lucky to have amazing mentors who believed in me and encouraged me to follow my dreams,” she says.

After several years as a physician and researcher at UCSF, Houtrow was recruited in 2012 to her current position at the University of Pittsburgh Medical Center. She was asked to grow its pediatric rehabilitation program. “It was a great opportunity for me to build a clinical program and advance my research,” Houtrow says.

Houtrow has authored nearly 100 manuscripts for high-impact medical journals and has been showcased in national media. She has served as keynote speaker and expert panelist at medical conferences and seminars around the globe. Her research has informed health policy, while her scholarly activity has included sitting on boards and committees, writing clinical reports to guide quality care, authoring and editing textbooks, and developing training programs for young physicians and scholars. “One of the great things about my career at this point is that I am able to mentor others,” Houtrow says.

These days, Houtrow is often in our nation’s capital serving on committees that help inform national policies. “It’s a great honor to be considered worthy of this work. What I give there gives me back so much in return—it’s a valuable reciprocity. And hopefully our efforts will help shape how we do our jobs and help children and their families.”

With all that Houtrow has already achieved, including induction into the National Academy of Medicine—one of the highest honors in medicine—she continues to shape new goals for the future. There is always, she states, room for improvement and growth. Kalamazoo College taught her about being a lifelong learner.

“I’m now doing some training in storytelling,” she says. “I’d like to learn how to disseminate information, promote ideas and solutions to non-academic audiences. Not just numbers and statistics, but to help others understand challenges in health care so that we can make needed changes.” She notes, “I am a physician and a researcher, but I was (and am) a patient first.” One of the positive aspects of having a disability, she says, is that it builds empathy for others. She muses that she hopes it will help her share her message to a broader audience, to make it real.

“I understand the challenges on a personal level,” Houtrow says. “It’s a running joke at my office. I make moms cry. I try to ‘open the door’ to let children and their families express their true feelings and talk about their experiences, their goals, their struggles. I am deeply humbled by the trust families give me. I am constantly wowed by my patients—their tenacity, their wisdom, their sense of humor. Truly, it is an honor to be their doctor and to be able to advocate to improve health services for all children with disabilities.”