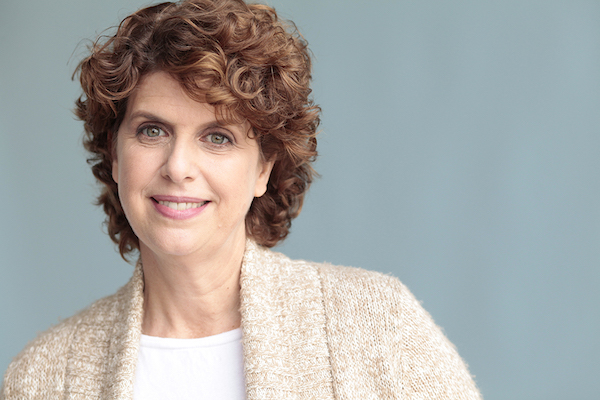 To maintain an acting career spanning four decades, Deb (Nassar) Snyder ’82 has relied on two qualities, both cultivated at Kalamazoo College: a passion for performance and the grit to keep going.

Snyder’s lifetime love for acting—as a little girl singing for her family, then through college and after—has led to local theatre, commercials, TV shows and a self-made web series. She played a central role in director Ang Lee’s first feature film, had scenes with Harrison Ford and other stars and even appeared recently in the voyeuristic guilty pleasure Big Little Lies. It’s taken her to England, New York, Florida and now Los Angeles, where she and husband Doug Snyder ’82 (a music major at Kalamazoo College) continue their creative pursuits, bolstered by their day jobs in communications and information technology, respectively.

Snyder’s parts are often on the periphery. She has played a secretary, a photographer’s assistant and even a cheerfully blunt “turkey meatball lady” in the CBS TV show Life in Pieces, serving food at a grocery store deli counter. For her, every chance to act—whether filling in as the housekeeper in a local theatre production of The Man of La Mancha or singing in a scene with Reese Witherspoon—is a chance to live her passion.

Snyder came to Kalamazoo College in a roundabout way via Indiana University. As an IU sophomore, she landed the part of Joanne at the Brown County Playhouse’s production of Vanities, a comedy-drama about the friendship between three Texas cheerleaders as they grow up and grow apart.

As it does for a lot of Kalamazoo College students, though, K’s study abroad program beckoned.

“I loved theatre,” Snyder remembered. “I was having so much fun, but I wanted to go to England, badly.

It was Evie McElroy, the director of Vanities, who provided the connection.

She told Snyder that she’d once worked in the theatre of a small Michigan college that sent students overseas. Snyder applied to K in the fall, and by January, she was at the College, studying theatre and playing nosey next-door neighbor Ruby in Getting Out under theatre department head Clair Myers.

Snyder later acted in several other productions at K, as Bunny (another next-door neighbor) in the dark comedy Gemini; as housemaid Dorine in the Molière comedy Tartuffe; and as Helen of Troy in Trojan Women in her senior year. She was tireless as a performer, though, she admits, perhaps not as a student. Snyder remembers performing in one Kalamazoo College play, then sprinting over to the Quad to perform with a band for Quad Stock, which she calls her first rock and roll appearance.

During study abroad in England, Snyder took full advantage of her surroundings, hopping trains and traveling to Switzerland, Italy and Germany and absorbing as much theatre as she could.

“It was cheap to go to plays,” she remembered. “I saw the Royal Shakespeare Company do Hamlet. I saw the National Theatre do a fabulous performance on roller skates. I don’t even remember how many plays I saw…I saw Macbeth in Italy. I made myself go to theatre companies I read about at K.”

Traveling through Europe helped her develop the tenacity she later relied on as an actress auditioning (and auditioning some more) for parts, she said.

“When you’re traveling around and you only have a Thomas Guide and a train doesn’t show up, there’s no panicking. There’s just, ‘OK, what am I going to do next?’ You’ve gotta stick with it. You’ve got to get from here to there some way.”

Snyder remembers her senior project well, a one-woman show she wrote based on Mae West, the bawdy, sexy blonde who started her career in vaudeville. Taking the character to the limit, Snyder shaved off her eyebrows and donned a curly blond wig and a Wild West saloon-style dress to belt out songs for her performance in the black box theatre in the basement of what was then the Festival Playhouse, later renamed the Nelda K. Balch Playhouse.

She teamed up with another actress friend, Leslie Simmer ’82, who did the first half of the show as the serious Francis Farmer, an outspoken actress who was forced into a psychiatric institution in the 1940s.

After graduation, Snyder continued her theatre education with a master’s program at Brandeis University in Massachusetts. Then she was out in the world, looking for opportunities to play the funny or dramatic women characters for which her experiences at Kalamazoo College laid the groundwork. At times it was difficult. She quickly learned that auditioning for a part—an accomplishment in itself—doesn’t mean getting it.

“It depends on what other people think and want,” she said. “And you have to have the tenacity to withstand the rejection.”

A break came with her part in Ang Lee’s 1991 indie film Pushing Hands, about the East-West cultural misunderstandings that happen when a Chinese widower moves in with his son and American daughter-in-law (Snyder) in the United States. During filming, Snyder stayed at her grandparents’ house in Yonkers, just a mile from the film set.

“I walked to the set every day listening to Aerosmith’s album Pump. That’s how I’d get myself pumped, emotionally charged for the scenes I had to shoot,” she said. It was an unforgettable experience for her, with a half American crew and a half Asian crew led by Lee, who was aiming for perfection.

The Snyders were living in Florida when the Sept. 11 terrorist attacks happened, and the fallout eroded her husband’s government contracting business. They decided to make a change.

“We packed our things and moved out to LA. We had no place to go. We said, ‘We’re in our 40s. What the heck. Let’s go try Los Angeles.’” Soon she had booked a commercial in LA that gave them a down payment for a house and helped them get established again.

“It’s the tenacity that K taught me. Just kindly, compassionately, but steadily keep going after it. You don’t stop dreaming, do you? Listen, I haven’t been able to give up acting after all this time. I’ve had some really good times.”

That also meant supporting creative endeavors with other means, Snyder pointed out. She works in communications for a local school. Doug, a bass player in three bands in his spare time, works in the IT department at Southwestern Law School.

With a drive to keep creating, Snyder devotes herself to other projects aside from acting. For the last 20 years, she’s teamed up with Philip Bynoe, an Emmy Award-winning musician, to make children’s music in a venture called PBnDeb. She helps, as treasurer and board member, with the Pasadena, California, organization Urban Harvester, which collects surplus food from grocery stores and restaurants and brings it to homeless organizations and others in need.

She also acts in her own collaborative projects, such as the comic web series Eve & Edna, which she created and wrote, and Meet Me at the Barre, which she produced.

As for getting that role in Big Little Lies, it took Snyder six auditions with David Rubin, whom she first met when she landed her small part in Random Hearts years ago. Snyder said most of the acting and goofy off-key singing she did for Big Little Lies Season 2, Episode 5 was cut. Nevertheless, she is visible, part of a group hug when (for those who have watched the show) Madeline and Ed visit a Big Sur healing institute to try and repair their marriage.

“I know what I did on that set,” she said. “I have so many friends who did beautiful work that ended up on the cutting room floor. And I said to them, ‘But you did the work.’ And sometimes, at this level, that’s what counts.

“Acting is such a big world and so much fun,” Snyder said. “It may not be about the Oscars and the big awards and the accolades. It’s about the journey. And mine has been long and tenacious and gritty and beautiful.”

…Talking to dog at the dinner table

“We have a roast”

“I see a turkey down there”

“you tell me what you want”

….The holidays can be weird

…But getting Bombas socks makes them a little more comfortable.