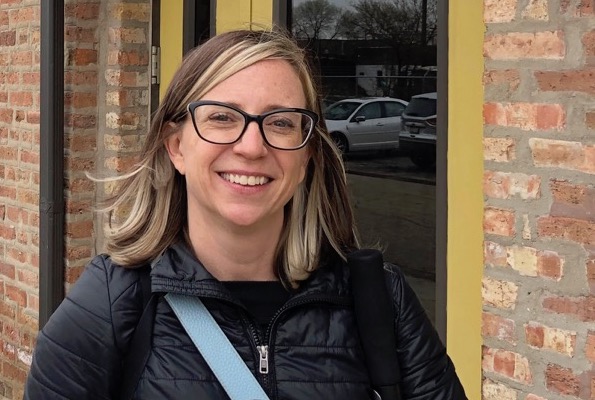 Story and photos by Randall Schau

For Alexis Leverenz ’97, a stint in pastry school and a subsequent stumbling block led to an entrepreneurial idea that was anything but half-baked.

It’s said that inside of every problem is an opportunity. For Alexis (Frankfort) Leverenz ’97, a challenge she faced led to a solution that has since benefited hundreds of Chicago-area small businesses.

In 2004, as a recent graduate from The French Pastry School in Chicago, Leverenz wanted to open a business making pastries. The city’s health code prohibited her from making them in her own kitchen, and as a small start-up, she couldn’t afford to buy and equip her own commercial kitchen. What she needed was a commercial kitchen she could use for a few hours a week. To her surprise, she couldn’t find one.

“I talked to other small food businesses looking for ideas and asked if they knew of some shared kitchen I could use,” she recalled. “They all said, ‘No, and we wish there was one out there, because we need one, too!’”

A catering operation that was going out of business provided Leverenz with an opportunity to provide such a kitchen. She leased its building and bought all of its equipment—ovens, stoves, refrigerators and cooking equipment—then made the space available on a pay-by-the-hour basis to whomever wanted to use it.

First there was cleaning to do. Lots of it. “I was covered in grease every day for two months,” she said. Once it was made bright, Kitchen Chicago became a shining example of “build it and they will come.”

“About the only advertising I did was the website my husband made, and going around putting up little notes on the bulletin boards of businesses in the area. That’s all I had to do,” said Leverenz. “Within two months I had 70 customers and was breaking even. Within a year I’d outgrown my space.”

Many of her first customers made things—cookies, scones, granola—that they would then sell at farmers markets. Several made products to sell from their food trucks during the downtown lunch hour.

For a short time, Leverenz used some of her space to run her own small cafe, where her clients could sell their products on consignment.

“I did that for about a year. Then my air conditioner died. That was an excuse for Jeff [whom she married in 2007] and me to pause and reconsider what we were doing. I asked him, ‘Do you really want to keep doing this, running a cafe?’ He didn’t, and neither did I. So we decided I’d just focus on the shared kitchen business.”

Early on, though, Leverenz had to deal with another headache—City of Chicago bureaucrats. “The City was not our friend at first,” she remembers. “They didn’t know how to license both me and the folks who wanted to use our space all under one address, so the City shut us down. The health department came in and threw away everyone’s food, then poured bleach over it. It was horrible!”

A writer for the Chicago Tribune heard about Leverenz’s plight and wrote a story. That got a lot of attention—and sympathy—which led to a radio interview, which led to a local television appearance.

Eventually, the Chicago Department of Public Health asked Leverenz to share her experience with the department to improve the process for future shared kitchen space users. “All of that exposure gave our situation enough attention that Chicago created a new type of license that worked for a shared kitchen.”

In 2009 Leverenz moved her operation to another building with much more space. She sold all of her old equipment and bought new. “I’d run the first kitchen for five years, so I knew exactly what I needed at my new place.”

Kitchen Chicago now offers five separate kitchens, each a bit different from the others, and about 20 businesses rent space on a nearly daily basis. These include food preparation for Grub Hub and Uber Eats. Other customers rent on a less frequent basis, a few on a one-time basis.

When Leverenz first started renting her current location, a portion wasn’t needed for the kitchens. Rather than have it go unused, she had new wooden floors installed, then rented the area for events, especially wedding receptions. Demand was high, so Leverenz recently leased another large area in her building, one floor below her kitchens. It will be able to host up to 250 people, more than double her other space.

When asked what it was about her background that gave her the confidence to become an entrepreneur, Leverenz smiles and pauses. Like many K grads, her journey took many turns.

“At K I was an Econ major with a minor in Chinese. That led me to getting a job selling bonds, and I found I wasn’t cut out for that. I was expected to make 100 cold calls a day, mostly to banks and credit unions. Eventually I quit and got a job at Merrill Lynch here in Chicago where I was a portfolio manager.

“That job was better, but I wanted something more fulfilling. I decided I’d either go to pastry school or grad school. I polled my friends about which I should do and they were unanimous: ‘Go to pastry school!’ So I did. While I didn’t go on to make pastries commercially, my training exposed me to a lot of things that led to Kitchen Chicago.”

While only a few of her classes at K had direct application to running her business, Leverenz thinks her liberal arts education guided her to where she is today. “At K I learned a little about a lot of subjects,” she said. “That’s helped broaden me, because here at the Kitchen I wear about 14 different hats.”

She also credits her study abroad in China with expanding her horizons.

“Never in a million years would I have gone there on my own; K made it easy. Being in China was incredibly interesting. This was in the mid-90s and people from the West were still a bit of a novelty. I remember jogging around a track and the men in the middle started to applaud. To this day I have no idea why they did that, but I became really comfortable with navigating the unexpected while on study abroad. It helped me grow as a person and got me out of my comfort zone.”

Leverenz has fond memories of K. “My years there were fabulous—just amazing. It was the perfect fit for me. I made such good friends. I’d like to go back and spend another four years there, to see how things have changed and gotten better.”

When asked about the 14 hats she now wears, Leverenz takes a deep breath, then rattles off a seemingly endless list of duties.

“Well, I schedule users and manage storage space, which there’s never enough of. I resolve conflicts between my users, like when one person goes past their end time and into the time of the next guy. And I’m always making sure the place is kept really clean, even if that means I have to grab a mop myself.”

Leverenz thinks a moment and adds, “Oh, I also fix things, like the garbage disposals. They’re always getting jammed so I’ve gotten really good at fixing them!”

Manager, scheduler, custodian, accountant, maintenance staff…Leverenz does it all, yet the aspect of Kitchen Chicago that clearly gives her the most satisfaction is nurturing small businesses and seeing them prosper.

“I love to help small start-ups,” she says. “I’m almost like their personal assistant. I know it’s a strange business model but I actually want them to outgrow us and move on to their own space. Our goal is for that to happen in two or three years.”

Leverenz offers two examples of such successes. One involved three men from Argentina who used Kitchen Chicago to make empanadas. Their business boomed, and they now have five stores in three states. Another business made salads for vending machines; it did well enough that it now has its own kitchen.

Leverenz acknowledges that not every operation prospers, and that’s just the nature of the business. “Sometimes a person thinks they want to start their own business, say, making cookies. They rent one of my kitchens and give it a go. Eventually, they realize that turning their dream into a profitable business is harder than they thought and they move on to something else. At least they gave it a try.”

And when businesses do well, Leverenz says, “I feel like a proud parent.”

In real life, she’s exactly that. She and her husband have two daughters, Eloise, 9, and Henrietta, 5, both of whom enjoy a residual benefit of their mother having gone to pastry school.

“I make my kids really great birthday cakes!” she says with a laugh.