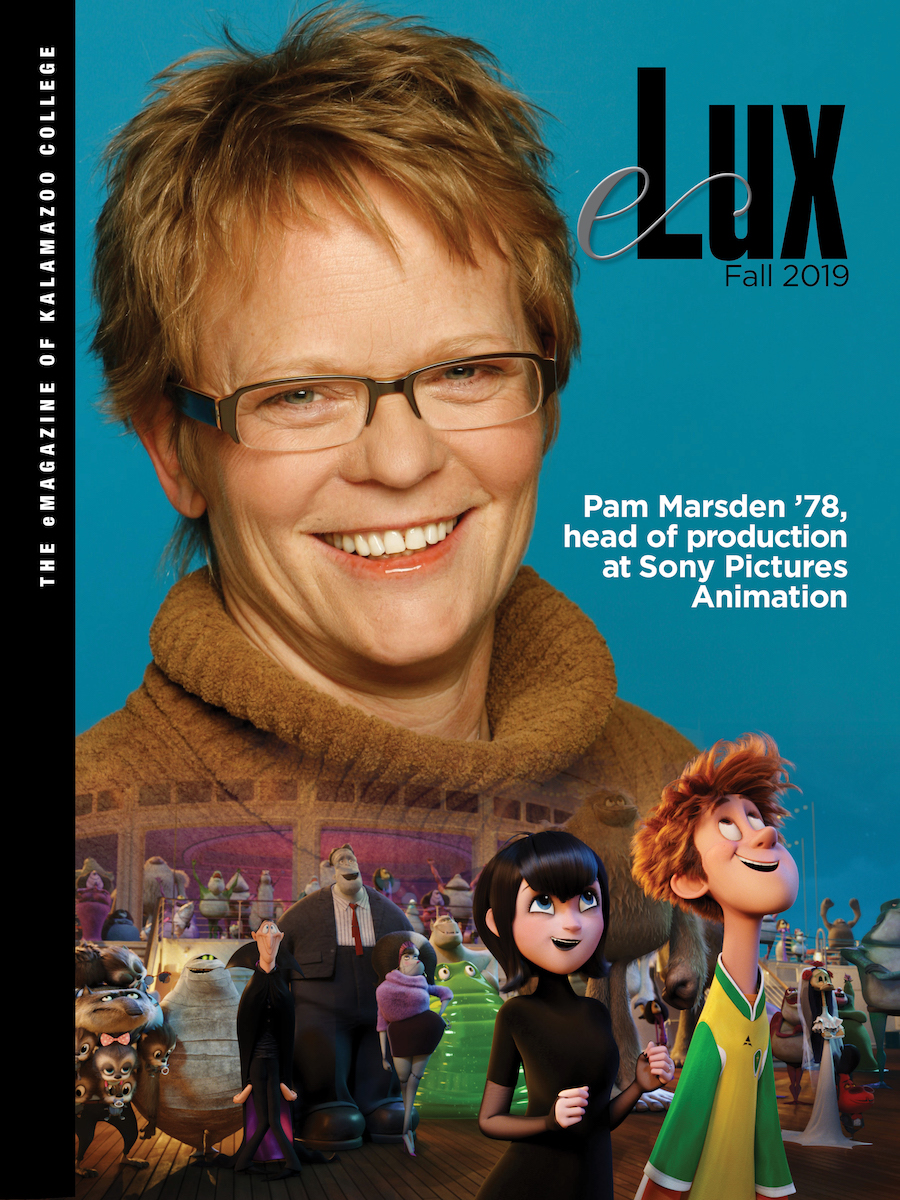 On a chilly spring morning at a diner in Burbank, California, Pam Marsden ’78 is having her usual order of coffee, over-easy eggs and a side of tomatoes. Being originally from Michigan, she’s dressed with a Midwestern practicality, but also a Southern California flair for color—a lavender quilted vest over a stylish polka-dot blouse and a red-pink scarf, matched by her red, hexagon-shaped glasses.

Breakfast is all she has time for today. For lunch, she’ll meet with a producer to talk over new story ideas. She’ll also check on the progress of several productions in the works. Then she’ll meet with a few artists about ideas they’re developing for other projects.

Her workdays are busy. She takes phone calls during her commute and answers emails in the wee hours. Still, she says, “I’m lucky. I have generally worked to have fun. That’s my goal.”

Marsden’s job is all about creating fun. She’s head of production for Sony Pictures Animation, the studio behind Cloudy with a Chance of Meatballs, Hotel Transylvania and The Emoji Movie. These lavishly crafted animated feature films are the ultimate in joyous escapism, in which artists and writers team with computer wizards to create fantasy worlds where hamburgers rain from the sky, it snows ice cream and there’s a luxury resort for monsters only (“No Humans Allowed!”).

Exploding with action and color, laced with sly cultural references and featuring voices provided by top actors, the films appeal to children and adults alike. They have come to be some of the biggest money-makers in cinema, generating a sizeable share of global animation industry revenues, which are projected to reach $270 billion by 2020. In recent years, Sony’s animation studio has grown apace, from about 80 employees in 2015 to around 300, and Marsden has been a key player in that expansion.

As with a successful party, the fun requires extensive behind-the-scenes preparation. Marsden manages the planning, budget and schedule for every movie on the Sony Pictures Animation slate. When she came to the studio 13 years ago, Sony Pictures Animation released one movie every 18 months or so. Now, Marsden is working on more than a dozen projects in production and development. Each can take three to four years from drawing board to theatrical release. And with long timelines and big budgets—Cloudy With a Chance of Meatballs had an estimated budget of $100 million and budgets for animated features at other studios have ranged as high as $260 million—it takes a lot of planning to make sure all the moving parts work together.

At the same time, Marsden knows a good plan can be flexible. That’s a lesson she got early on.

As a student at Kalamazoo College, just down the street from her childhood home, Marsden decided on a pre-med track. That didn’t last.

She said her friend Tom Morris ’78, now director of marketing and operations for the Santa Fe Opera in New Mexico, was a theatre major and “was having a lot more fun than I was, so he lured me into a theatre class. I never left.”

Nelda K. Balch, late namesake of the then-new campus theatre, was in charge of the Department of Theatre Arts. Marsden remembers Balch’s stern exterior masking her devotion to her students. She had them study and stage serious works by Henrik Ibsen and Anton Chekhov and required that her students read The New York Times on Sundays, a habit Marsden has kept.

Marsden threw herself into Balch’s program: acting, directing and even creating costumes. During the summers, she sewed costumes for productions at the College and worked at the Kalamazoo Civic Theatre.

In the theatre she found a sense of community that continued after graduation, when she went to work at Michigan Opera Theatre in Detroit, then at the St. Nicholas Theater in Chicago. Later, Marsden worked for the International Theatre Festival of Chicago and met and married her husband, Peter Siragusa, who worked as an actor and is now a drug and alcohol counselor. They have two grown children, Cody and Jordan.

“I felt I was with like-minded people,” Marsden says of the theatre program at Kalamazoo College. “I fell into something that I just never left.”

Theatre is about working together toward a goal, she says. There are the actors and director, and also the costume-makers, stage manager, lighting operators and many others playing their parts. It was the perfect preparation for working in animation.

In the 1990s, Disney’s long-established animation studio was undergoing a rebirth, starting with the success of The Little Mermaid in 1989. Those at the helm had theatre backgrounds, and they reached out to other theatre people, like Marsden, to fill their growing ranks.

So Marsden and her family moved west in 1995. She wasn’t a stranger to Los Angeles, having worked on the Olympic Arts Festival when the 1984 Summer Olympics put the city in the international spotlight. She had managed the theatrical component of the festival, overseeing productions by more than 20 theatre companies, ranging from small shows for children to grand spectacles.

At Walt Disney Feature Animation (later renamed Walt Disney Animation Studios) and Disneytoon Studios, Marsden was a producer. She worked on Dinosaur, which mixed computer-generated imagery, or CGI, and live-action filming. (Disney started its own CGI studio after having worked with Pixar Animation Studios on the ultra-successful Toy Story, Marsden explains.)

“[Disney] wanted to make a CG dinosaur movie, and I said, ‘What’s CG?’” Marsden recalls. “In some ways, it was nuts to call on me, because I knew nothing about animation. I knew nothing about filmmaking…I really was able to get in at the beginning of CG moviemaking, and boy, that is just luck. I know that every day.”

Marsden moved to Sony Pictures Animation in 2005, and in 2017 became head of production. She’s also responsible for the studio’s overhead costs, which occasionally means weighing in on minor details like parking and installing a juice bar, she says, laughing.

“I have a very small circle, and we are responsible for the budget and schedule of all of those movies,” she says. “We’re in a really interesting and exciting phase.”

“I am very fortunate to have Pam as my partner,” Kristine Belson, president of Sony Pictures Animation, said in a statement at the time of Marsden’s promotion. “Not only has she masterfully led the dramatic growth of our operations and creative community, she’s done it all with positivity and humor which I am thankful for every day.”

There may be lots of hilarious chaos in the movies Marsden’s studio makes, but she maintains her good humor by avoiding it in real life. That means always having strong plans for the studio’s work. For such massive projects as The Emoji Movie, which had a $50 million budget, a detailed blueprint is essential. A plan is like true north, Marsden says. It’s also a way to measure progress and, ultimately, success.

“If you don’t have a plan, you can’t tell where you are,” she says.

Marsden, however, is also the type of leader who’s open to ideas, even if it means adjusting a plan. She sees her job as providing the creative space for people to stretch their imaginations. How else to produce a movie about the emojis on our phones having their own adventures in a make-believe, digital world?

So what about deviating from the blueprint?

“Sure, absolutely! There is a time at the beginning of every project where it’s really good to go off-roading, because you don’t get to do that later on,” Marsden says. Ideas can be tested and perhaps discarded, she says, but as long as they’re considered, there won’t be second-guessing about “what if?”

We asked Pam Marsden ’78 to name a few of her favorite animated movies, and it’s no surprise it was difficult for her to narrow it down to just three. Here’s what she had to say:

“Unfair question! I like so many for different reasons.

“The classics. I love Pinocchio and Dumbo and remember being transported by those stories as a kid. I think I fell in love with storytelling in those movies.

“The offbeat. The Triplets of Bellville is a favorite, and I’ve made a lot of people outside of animation watch it. There are no words, so the story must be told entirely in the visuals and sounds. It is a delightful comedy that is surprising and playful. The design is so quirky, it would never be made by a big studio. Because it is independently made, you feel the eye of the artist and a fresh and unique style.

“The must-see. I am sentimental about Cloudy with a Chance of Meatballs. It was exciting to make a new movie in a new studio. I was happy to be part of a movie that broke away from the typical tent-pole formula for animated theatrical releases. That movie set me up for a longtime relationship to Sony Pictures Animation, which has been  a great home for me.

“But I also love Toy Story, Beauty and the Beast and Zootopia. Is that three?”