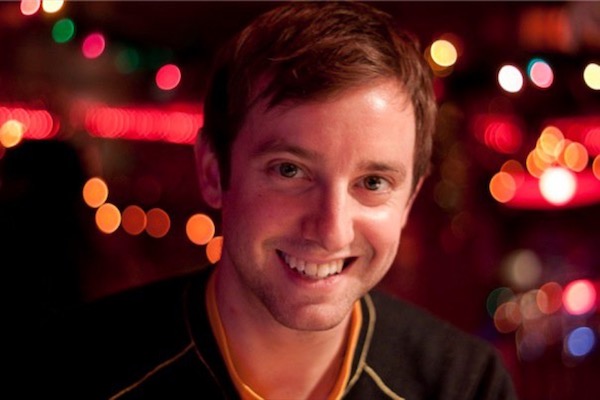 It’s late morning, and Joe Tracz ’04 is taking a call with producers to go over notes on his current project—an adaptation of the Wayward Children book series for the SyFy Channel.

Wayward Children imagines what would happen if children who had found portals to fairytale worlds were unceremoniously dumped back into their original lives as young adults. How would they mourn the loss of their magical lives and how would they adjust to the “real world”? For Tracz, the painful adventure of growing up and discovering one’s identity is a theme that first emerged as a K student and budding playwright, and it’s followed him throughout his blossoming career as a writer for stage and screen.

Like many students, when Tracz came to K, he wasn’t sure what he wanted to do in life. He loved theatre and writing, so the English major kept one foot in the theatre program while he sharpened his writing skills. It was his study abroad experience in the U.K. that brought playwriting to the forefront and started Tracz on his future career path.

“I was at Goldsmiths, University of London,” remembers Tracz. “I was seeing a ton of theatre, and playwrights came out for Q&A sessions. Playwrights were suddenly less Shakespeare and more living, breathing writers. I thought maybe I could be one, too.”

The timing couldn’t have been better. As Tracz returned from London, the then head of the theatre department, Professor Ed Menta, was looking to expand the playwriting program. Suddenly, Tracz had access to courses and opportunities to cultivate his craft.

His senior year, Tracz had a conversation with Menta that sparked what would become his senior individualized project (SIP), Alison Shields. Menta had read a story about a woman who had continued to attend high school long after when she would have graduated. Based on this strange-yet-true premise, Tracz created a story that was a mystery, a memory play, a high school romance and a coming-of-age story about a young woman unable—or unwilling—to grow up.

“Right away, Joe knew what to do with it. It was his to write from the moment he heard the story,” said Menta. “He had a fire from day one.”

After graduation, Tracz took that fire and moved to Chicago. There he worked as a literary department intern at Chicago Dramatists and the Goodman Theatre, as well as teaching in the youth education program at Steppenwolf.

“Chicago is a great place to explore theatre,” said Tracz. “It’s easier to put up new material because it’s much cheaper to rent space and there’s an all-hands-on-deck mentality, so you get to be involved in every aspect.” To that end, Tracz immersed himself in what the city had to offer, working as a dramaturg, assistant director, light board operator—everything but an actual playwright.

Tracz missed writing and in 2007 he left Chicago to attend New York University Tisch School of the Arts, digging into a variety of classes in theatre, film and television writing. After receiving his Master of Fine Arts from Tisch, Tracz developed work at the Public Theater, Manhattan Theatre Club, Ars Nova, Roundabout and Second Stage.

In 2011, while juggling multiple projects, an opportunity came up that would send Tracz on a nonconventional journey to the mecca of New York theatre: Broadway. Tracz’s agent set him up on a professional blind date with veteran composer and lyricist, Joe Iconis, and handed them a book. It was Ned Vizzini’s popular young adult novel, Be More Chill.

The book tells the story of a socially awkward teenager, Jeremy, who is just trying to survive high school and get the girl—with a sci-fi twist. In a Faustian bargain, Jeremy swallows a pill containing a supercomputer known as the SQUIP (Super Quantum Unit Intel Processor). The SQUIP, which implants in his brain and tells him what to say and do, assures Jeremy that it will teach him how to be popular. Teenage antics, campy humor and valuable lessons ensue.

The story spoke to Tracz and Iconis, and they set to work turning it into a musical. The show opened at the Two River Theater in Red Bank, New Jersey, and had a four-week run. Local super-fans—mostly teenagers and college students—went back night after night. To preserve the show, the theatre helped produce a cast album.

The earworm album got a new life through music streaming channels, fan-made YouTube videos and online chatter. When the show eventually found itself off-Broadway, the cast album had been streamed more than 150 million times. In the spring of 2019, it hit the big time at Broadway’s Lyceum Theatre, breaking the house record for a single week of ticket sales.

“We thought the show was over, and then the internet completely disrupted the normal production chain,” said Tracz. “It was beautiful to see this original show find an original way to Broadway.”

As Be More Chill was finding a new life, Tracz was finding new work—this time in L.A. as a writer and producer for all three seasons of Netflix’s Lemony Snicket’s A Series of Unfortunate Events, another story of young people (the Baudelaire orphans) realizing their strengths and talents while battling real and fantastical situations. As both a writer and producer, Tracz had an opportunity to be involved in all aspects of production.

“It was like being back in Chicago, having a hand in all areas,” said Tracz. “It also meant a lot, because I was helping to write these beloved characters to their conclusion.”

The series has been lauded for its fantastic sense of pacing and fun wordplay, earning numerous award nominations, including a 2019 Writers Guild Award nomination for an episode penned by Tracz.

He was also hard at work on the book for The Lightening Thief: The Percy Jackson Musical, an adaptation of the best-selling young adult novel by Rick Riordan. The musical, which started its national tour in January 2019, earned Lucille Lortel and Drama Desk Award nominations in 2017. It tells the tale of a teenager who discovers he’s the son of the Greek god Poseidon and goes on an epic quest.

It’s a familiar theme for Tracz, and he’s always hungry to find a new angle on what it means for people to find their places in the world. Whether it’s a woman attending high school long after graduation, a relatable loser swallowing a supercomputer to be more popular or a trio of orphans transitioning from the innocence of childhood to the moral complexity of the adult world, his characters have come of age through the lens of fantasy and with the modern twist of technology.

“I’m a part of that last generation that aren’t digital natives,” said Tracz with a laugh. “I mean, I had AOL Messenger in college, but it wasn’t the social media world we’re in now. Still, the internet has always been a place to try on different identities, to start discovering and honing who you are. And that’s a story that has always spoken to me.”