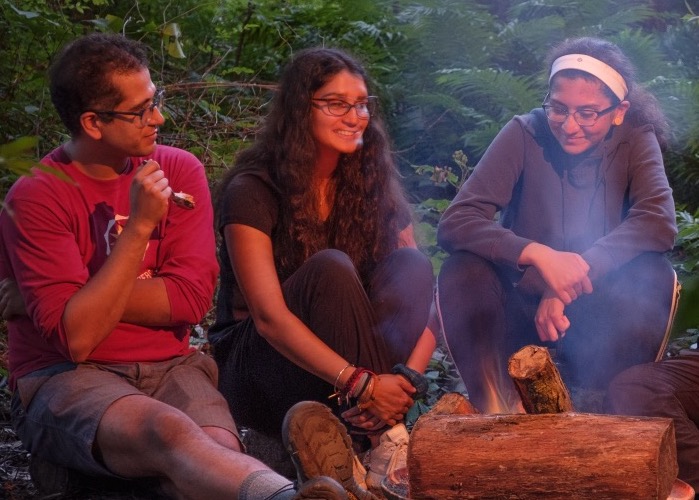 LandSea is an optional 18-day outdoor trip for Kalamazoo College students that occurs just before first-year orientation. In its 45-year history, more than 2,000 students have participated in this wilderness adventure. For students who embark on LandSea as first-years or as leaders, the skills and knowledge that are learned on trail can last a lifetime. For Vinay Sharma ’12, these lessons have guided him from his first LandSea patrol at age 18 to his post-graduate medical research fellowship in Rwanda. This is his story.

Six days into the trip, I did not regret my decision to be back on LandSea, this time as a leader. I met my circle of friends on LandSea the year before and cherished the thought of sharing campus life with the incoming class. Furthermore, I had a fascinating experience with Leaders’ Retreat, learning a variety of soft and hard skills, exploring topics from emotional intelligence to making a stretcher out of a backpack and paddles.

E9 had a stormy beginning in The Park. The rain woke us at 4:30 a.m., the tarp pressed against our faces from the pooled water. We all hoped the rain would abate during the drive to the trailhead, but as we received our canoes, the rising crests of the waves signaled Day One of LandSea would be windy and wet. We overcame these initial hurdles and the group slowly came together. As a sophomore leader, I found myself relying on my senior co-leader for advice. We both appreciated the idea of “lead from behind” and tried to take every opportunity to give control to our participants. Today marked a turning point in our trip as we let two of the participants be leaders for the whole day, and we took a more reserved role. The participants made decisions about everything: when to rise, whether to turn left or right, who would set up camp and more. Throughout the hike my co-leader and I diverted nearly all questions back to the participants, which caused some frustration, but the group made it to the campsite—not exactly at the predicted time, but safely and successfully nonetheless! My co-leader and I felt good, and more importantly, the group relished in their accomplishment. My co-leader and I made dinner for the group as we all relaxed after a great Day 6.

We lost the whole D7 patrol on Day 12. Just kidding, but the risk had crossed my mind after my co-leader and I felt confident enough to let the patrol self-guide the entire day on their own. We dropped back about 200 meters, out of sight but within emergency whistle distance. This gave the participants a chance to develop trust with each other and build their own self-confidence. In the meantime, my co-leader and I had a chance to discuss the trip and further bond as a team. We trusted the group to make it to the camp, where they agreed to do everything (including cooking dinner for the leaders) which made us quite happy. Day 12 proved to be a successful day. At this point in the journey, the group had mastered many skills and we leaders did not need to do much. We just observed in the background as the participants steered the rest of the trip.

From the beginning of Leaders’ Retreat, I unfairly held onto the romantic notion that this year—2011, my third year as a leader, senior year, my last year—would be smooth. The repetition of learning the soft skills during Leaders’ Retreat was positively impacting my life in the front country. I felt more confident approaching and handling conflict and it became easier for me to talk about things on my mind, to forego judgement and hesitation, and simply express myself. I knew my technical skills were strong, and even though we were entering into a new Park, I felt there was little left to be learned on LandSea.

But this patrol, C5, what happened!?

Early in the trip a participant refused to portage; at one point our patrol slept on the trail, and we fell behind and did not see our sister patrol C6 for four days. The challenges of the route impacted group morale and at one point I felt an unwanted me-versus-them air among the group that I did not understand.

Unlike previous trips, where I sensed the growth of the group throughout the trip, the tremendous positives of leading C5 only became apparent as the trip came to its close. The one participant who refused to portage always offered to carry canoe paddles and by Day 8 of the trip he completed a 300-meter portage! Slowly the group came together and took on more responsibility. In the moment, however, I doubted my leadership skills, often overlooking “leading from behind,” and this cast a cloud of ennui over my eyes which blinded me to the small and meaningful gains that happen every day on LandSea. I felt guilty for the experience I was providing to the future class of 2015. Would I have changed things during the trip? For sure, but while my hindsight was 20/20, my foresight was 20/70, despite wearing glasses.

Day 16 marked the end of the trip. The participants headed back to K on the orange and black bus, while we leaders spent one last night in The Park. I spoke with a leader of my sister patrol as the stars twinkled in the sky. We shared our roses and thorns: What happened? Did you see any animals? Any problems with participants? How was your leading experience? Being seniors, our time with LandSea ended on Day 16 of 2011. Our conversation lasted long and late, eventually concluding with one question: “What is next for us?” The next morning we drove out of The Park.

The scheduled phone interview with the doctor about a medical research fellowship in Kigali, Rwanda, greatly excited me. Since graduation, my life traveled in many directions—via a brewery, into orthopedic research, through graphic design, to a medical clinic in Guatemala—eventually ending up in medical school. As I waited for the phone call, I paced between the kitchen and the living room. Interviews did not bother me, despite my nervous habits, but I really wanted this global health opportunity. In some way, it validated all my earlier work experiences and more so, it could be an opportunity to blend all of them together.

In the living room I paused and looked at the framed map of The Park hanging on the wall. My roommate and I had both led trips on LandSea for three years, the last one being seven years ago. I retraced routes on the map which brought back memories of Gatorade-blue lakes, losing and finding a participant, and that last enlightening 2011 LandSea trip. Lessons learned from the backcountry guided me in the front country to this day, and I often think about the struggles of my final trip. I attribute many of those woes to an inability to adapt to spontaneous changes. So what if we fell behind or a participant did not want to portage? These were the cards handed to me and instead of initially becoming frustrated I could have listened and learned to make a better experience.

The phone suddenly rang, jolting me out of nostalgia and back into reality. It was the doctor. We exchanged formalities and he provided some details about the program in Rwanda—a research position focused on enhancing clinical research capacity among emergency medicine residents. I had little experience with sub-Saharan Africa and this trip stirred up simultaneous nervousness and excitement. The doctor then proceeded to ask two interview questions. The first inquired about my ongoing research project. No problem, I thought. I had just written an introduction for the manuscript and knew the project inside and out. Then the doctor introduced the second question, which had an air of “this-is-more-abstract-let’s-see-how-you-answer-it.” I thought to myself, okay, this is the question that will separate me from the other candidates.

And then I heard it: What does the concept “lead from behind” mean to you?

I could not help but chuckle. How do I summarize four years in four minutes?

“Leading from behind is about building a community where people, participants and staff, can work together, contribute, trust and problem-solve together,” I said. “It is about building capacity and confidence amongst a group of novice learners and recognizing that the journey may be arduous. Each person in the group has potential and learns their own way. More importantly, the leader is present but remains in the background, only entering when asked or if a serious mistake will ensue. When it falls apart, when it does not work, the leader needs to reassess—is there a different approach, could I do something better, do we need to discuss a better plan? Learning takes time and teaching takes patience. Finally, it is a good model for education; it places the emphasis on the student and when effectively carried out, people learn so much, both passively through observing and actively by doing.”

Three months later I found myself walking out of Kigali International Airport and into a new park.